In 2018, Kurtz Construction was chosen by Fairmount Park Conservancy to undertake a roof restoration on Woodford Mansion, a c. 1758 Georgian mansion located along the Schuylkill River. As part of the restoration project, Kurtz removed and replaced the mansion’s cedar shingle roof, metal flashings, and damaged gutters, as well as working to stabilize several of the chimneys. Woodford Mansion, located in East Fairmount Park, Philadelphia, is a prime example of a colonial era “Gentleman’s Retirement,” the country home of a prominent Philadelphia businessman or politician. William Coleman, a well-to-do merchant and eventually a Justice on the Provincial Pennsylvania Supreme Court, built Woodford as his country seat in the mid-18th century, completing construction around 1758. Over several years and various owners, the mansion underwent some modernizations, such as the addition of full second floor and two-story rear addition. In 1868 Woodford was purchased by the City of Philadelphia and incorporated into Fairmount Park, where it served as the headquarters, police station, and temporary jail of the Fairmount Park Guard until 1927. At this time the mansion was leased by the Naomi Wood Trust, who chose Woodford to house the extensive collection of colonial art amassed by its late namesake. The Trust restored the mansion and, in 1930, opened Woodford to the public for the first time. The Naomi Wood Trust continues to operate and maintain the mansion today. For more information on Woodford Mansion or the Naomi Wood Trust, see https://woodfordmansion.org/. 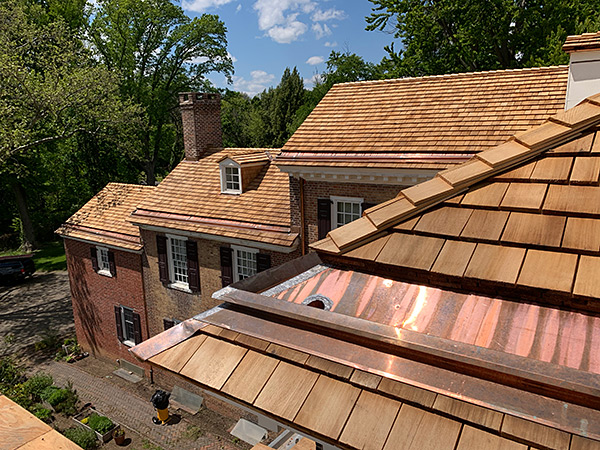 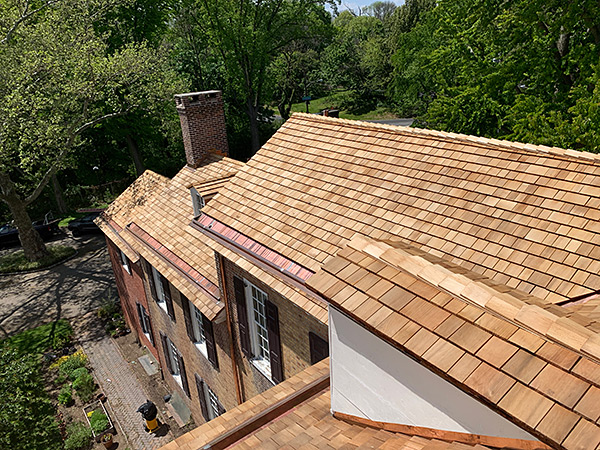 In 2019, Kurtz Construction was commissioned by Stenton Mansion house museum to replace the historic building’s wood shingled roof, as well as remove and replace the metal flashings. Constructed in the 1720s as the country seat of prominent Pennsylvania political figure James Logan, Stenton Mansion is notable not only for its early Georgian architectural features, but also for its role in local and national history. In addition to hosting notable figures during the lifetime of James Logan (1674-1751) and his son William (1717-1776), around the time of the Battle of Germantown the mansion served as lodging for important military officials on both sides of the conflict. At different times, General George Washington and British General Sir William Howe both lodged at Stenton, placing the mansion at the center of the American Revolution and War for Independence. Since 1899, the National Society of the Colonial Dames of America have maintained the building and its grounds for educational and research purposes. For more information, visit https://www.stenton.org/. 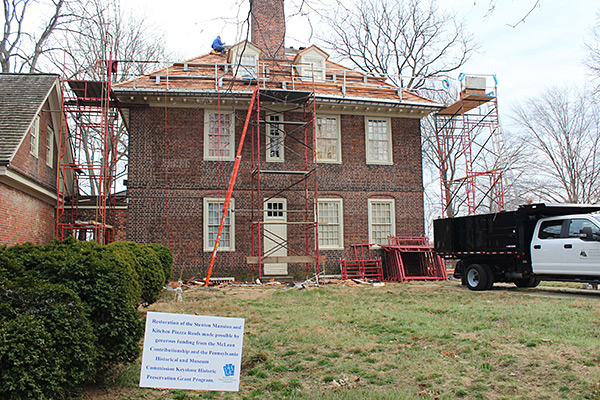 Solomon House on 17th street in Philadelphia, PA, was constructed in 1887 by architect Frank Furness and real estate developer Joseph Solomon. One of five brick-and-brownstone rowhomes originally constructed by the pair, this home is the only one still remaining. In 1978, the building was listed on the National Registry of Historic Places. Recently, Kurtz Construction was commissioned to restore the Solomon House’s tiled Mansard roof, fabricating and installing new gutter and downspout systems, removing and replacing the tile roofing with salvaged and reclaimed tiles, including the c. 1863 tile pictured below, as well as installing new copper flashing to the building’s dormers. Currently, the building houses various small businesses. 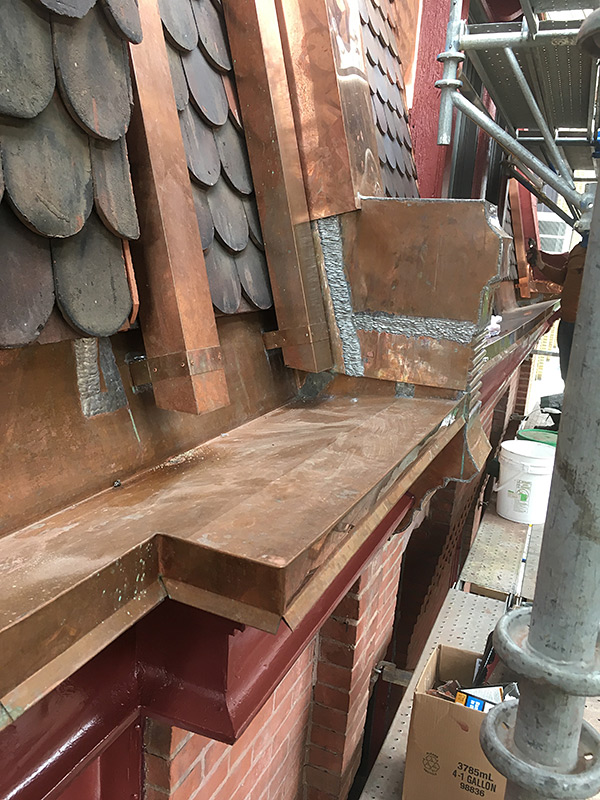 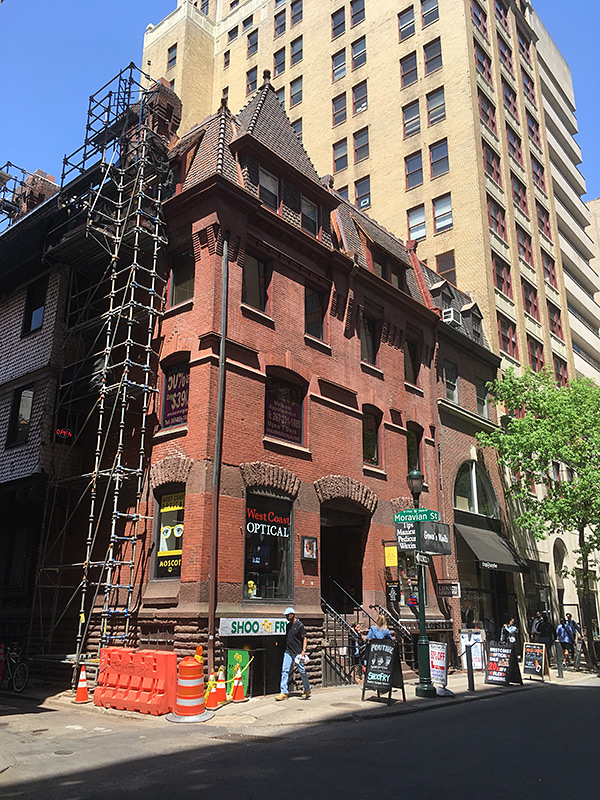 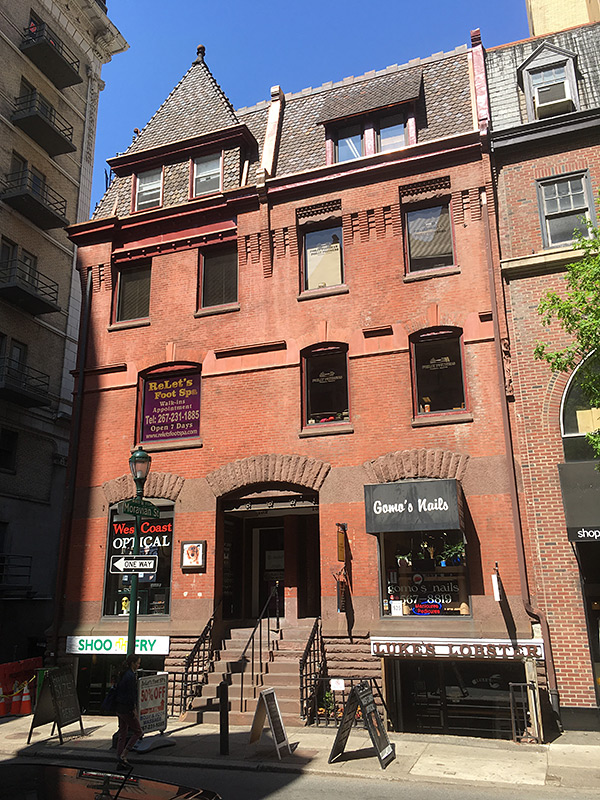 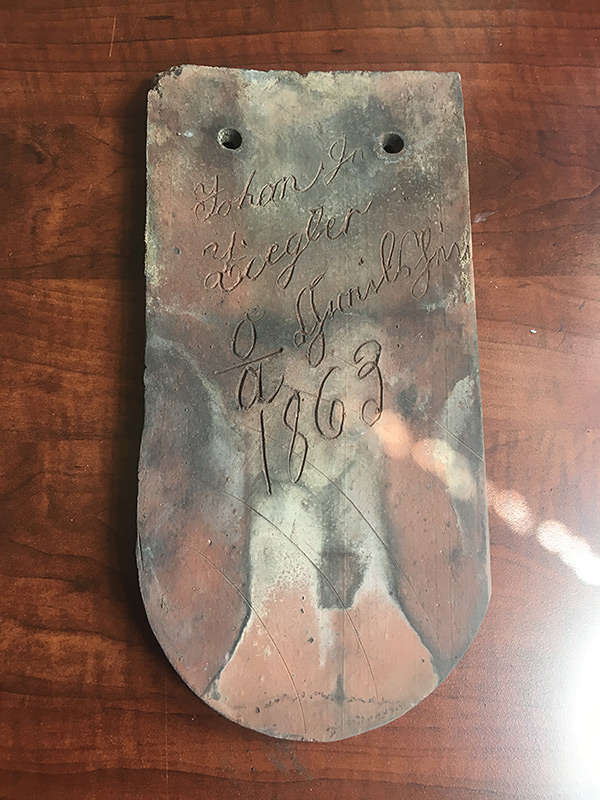 Laurel Hill Mansion, a two-story Georgian estate located along Philadelphia’s Schuylkill River, was constructed in 1767 by Samuel Shoemaker and his wife, Rebecca Rawle Shoemaker. The Shoemakers were known Loyalists, and during the Revolution their home was confiscated and sold at auction, forcing most of the family to flee to England. Upon their return, they repurchased Laurel Hill, passing the estate through generations of their family. One notable descendant is Rebecca’s son from her first marriage to Francis Rawle. William Rawle, Esq. was a noted figure in Philadelphia, appointed Attorney General of Pennsylvania by George Washington in 1791. His law firm, Rawle and Henderson, is the oldest operating law firm in the United States. Rawle was also an abolitionist, serving as President of the Pennsylvania Abolitionist Society. Under his ownership, two additions were added to the original home, including a single-story addition to the south, and a Federal-style octagonal addition to the north. Laurel Hill is currently maintained by the Women for Greater Philadelphia as a historic site and house museum. In 2017, Kurtz Construction worked to remove and replace the building’s wood shingled roof and metal flashings. For more information on Laurel Hill, visit https://laurelhillmansion.org/index.html. 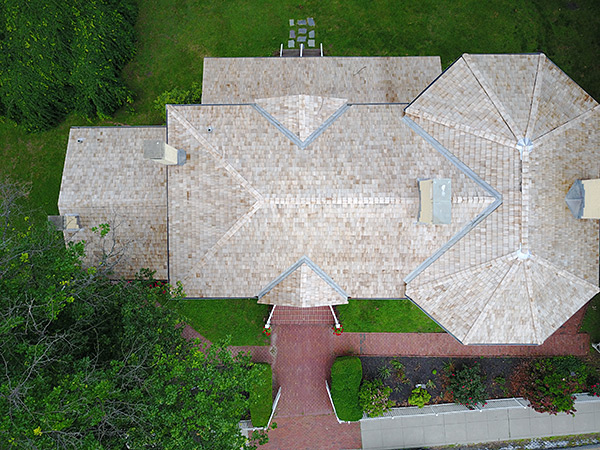 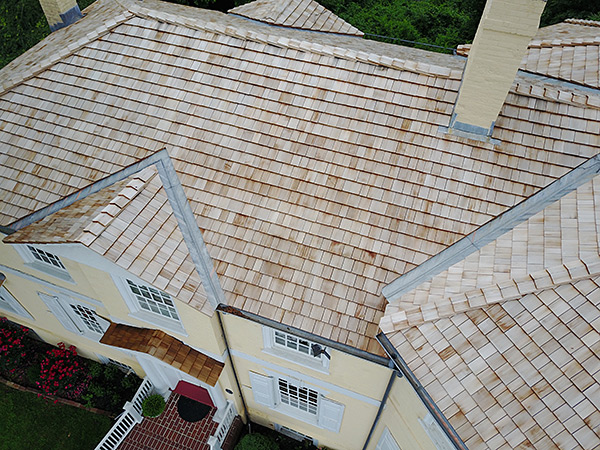 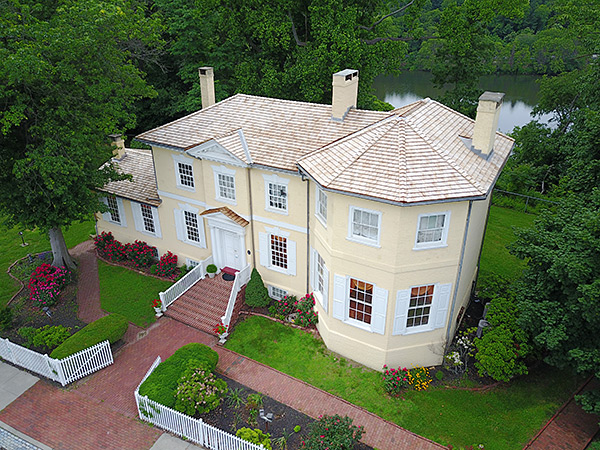 First settled in 1717, the tercentennial anniversary of Historic Trappe in Collegeville, PA saw a large-scale restoration effort of the various historic properties in the area. Among others, historically significant buildings in the area include: Muhlenburg House – the home of noted Lutheran pastor, Reverend Henry Muhlenburg whose parish – Augustus Lutheran Church - is designated as a National Historic Landmark; The Speaker’s House, home of Frederick Muhlenburg – the first Speaker of the U.S. House of Representatives and son of Rev. Henry Muhlenburg; and Dewee’s Tavern, which currently houses the Center for Pennsylvania German Studies. Kurtz Construction has participated in numerous restoration projects associated with Historic Trappe, including the roof restoration of the Speaker’s House, meant to return the building to its original design c. 1740s. For more information on Historic Trappe, visit https://www.historictrappe.org/. 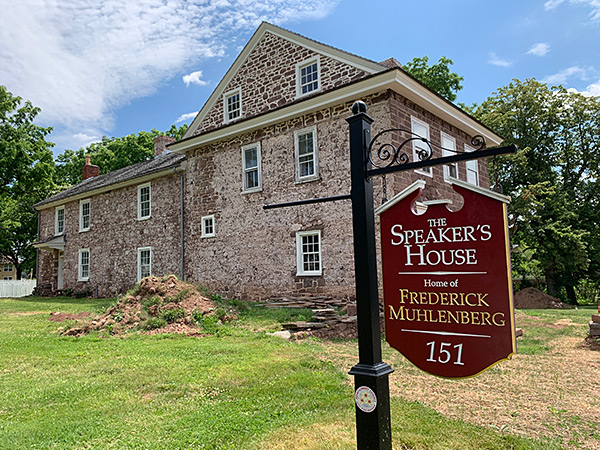 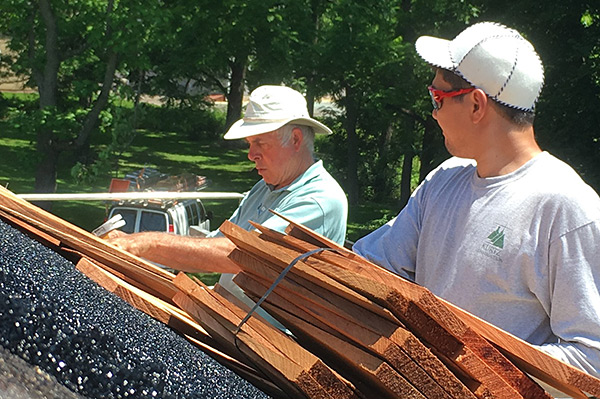 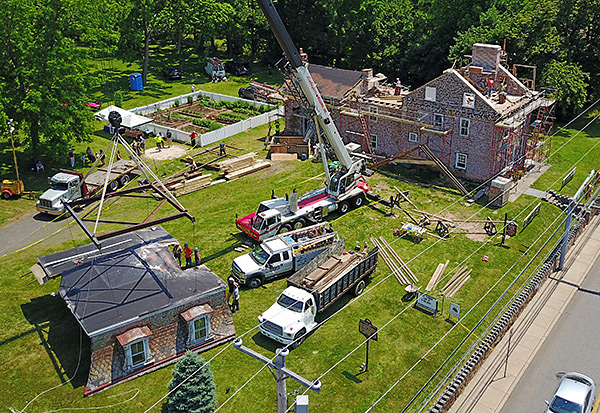 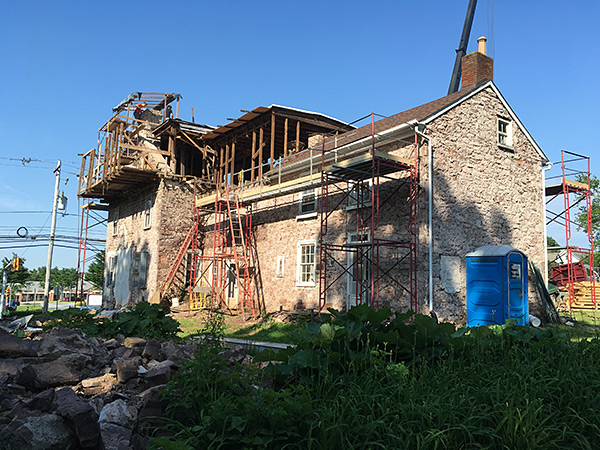 Bryn Mawr College was founded in 1885 by Quaker educators who wished to provide a more comprehensive and rigorous education for women in the Philadelphia area. Buildings on campus were designed in the “collegiate gothic” style of Cambridge University, nestled on grounds designed in part by famed landscape architect Frederick Law Olmstead. Notable faculty and alumnae include respectively Woodrow Wilson, who went on to become President of the United States, and Audrey Hepburn, class of 1928. Kurtz Construction has worked to restore and repair numerous buildings on the campus, working under significant time constraints to complete necessary projects before the student body was scheduled to return from summer break. In addition to repairing structural damage, the team at Kurtz Construction removed and repaired original elements of the roofing system on Goodhart Hall. Various other buildings including Denbeigh, Pembroke, and Rockefeller Halls underwent full roof removals, and the installation of new slate roofing and copper flashing and trim.

For more information on Bryn Mawr College and its history, visit https://www.brynmawr.edu/about/history. 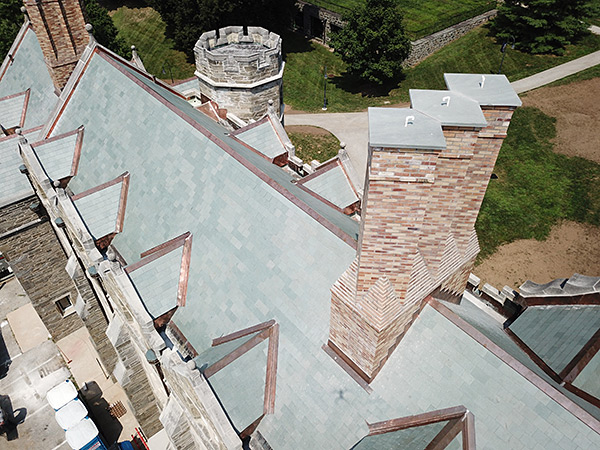 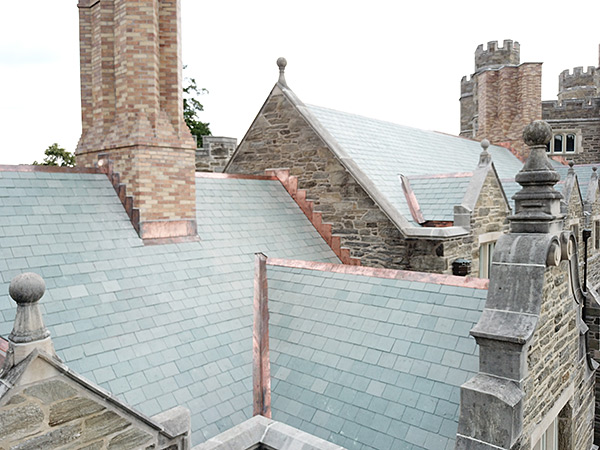 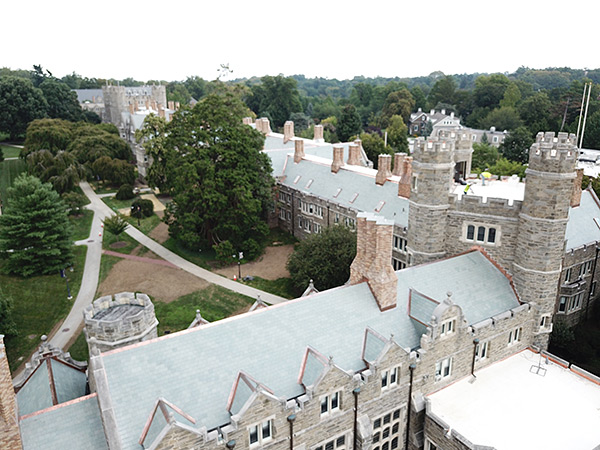 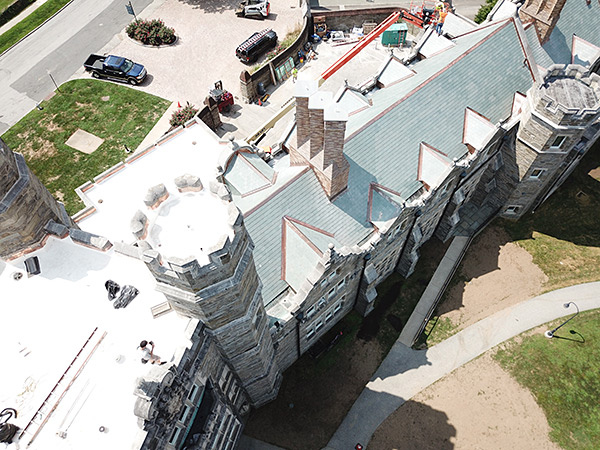 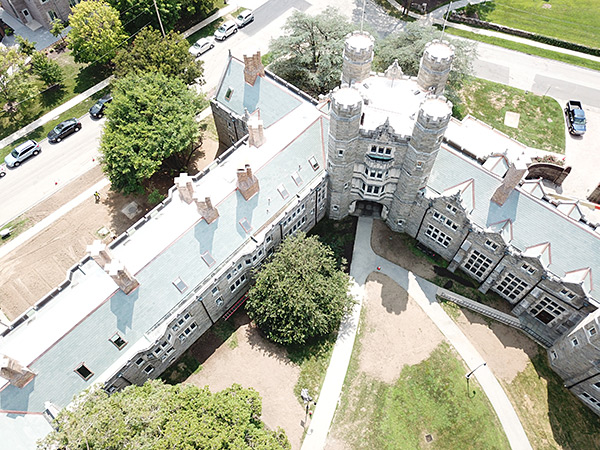 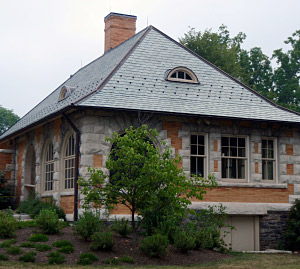 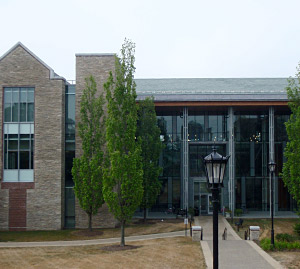